The (postero-) lateral approach in the supine position is described below (Figure 1). The advantage of this technique is that it is possible to maintain eye contact with the patient. Sedation is rarely necessary. 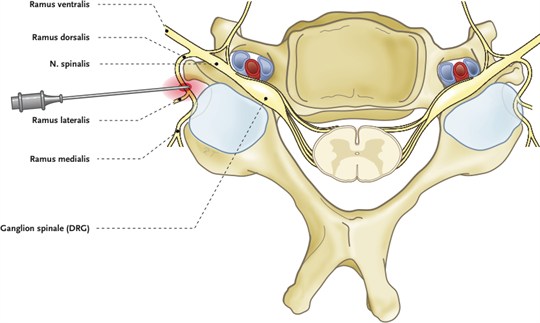 Figure 1. Posterior lateral approach of the cervical medial branch of the dorsal branch. 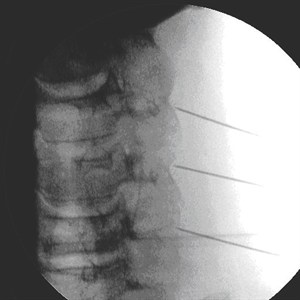 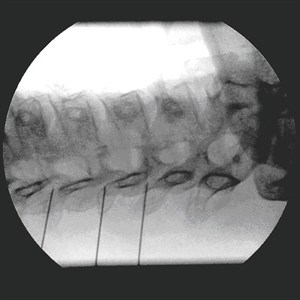 The injection point is marked on the skin, slightly posterior and caudal to the end point of the needle, which is dorsal to the posterior boundary of the facet column. The first needle is introduced in a horizontal plane, slightly cranially so that its tip points in the direction of the end point. It is important to understand that this is not a 'tunnel view' technique. The needle is slowly advanced anteriorly and cranially until bony contact with the facet column occurs. The further the needle is advanced, the more difficult it becomes to change the direction. Therefore, the position of the needle must be checked frequently. If the needle points too much in the direction of the intervertebral foramen, without contacting bone, the direction should be corrected to become more posterior. If there is no bone contact in the posterior direction, there is a risk that the needle will enter the vertebral canal between the lamina. In order to prevent this occurring, the needle position can be checked in the AP direction. The final position of the needle in the AP direction is in the concave 'waist' of the facet column. After placement of the first needle, the other needles are introduced in the same way. The first needle acts as a guideline for direction and depth. The same technique is used for the facet joints of C3-C4 to C6-C7.

Once an optimal anatomical location has been reached and controlled using fluoroscopy, the position of the needle tip at the medial branch of the dorsal branch is confirmed using electrical stimulation. The stimulation threshold is determined: an electrical stimulation of 50 Hz must give a reaction (tingling) in the neck at less than 0.5 V. Then stimulation is carried out at 2 Hz. Contractions of the paraspinal muscles can occur. Muscle contractions in the arm indicate a position close to the exiting segmental nerve. The needle should then be placed more posteriorly. Once the correct position has been determined, 0.5 to 1 ml local anaesthetic (1% or 2% lidocaine) is given. An RF lesion at 80°C for 60 seconds is carried out.

Complications are rare, but it should be noted that, if the needle ends up too far into the foramen (especially on the anterior side), there is a risk that the vertebral artery will have been punctured. In order to prevent injection of local anaesthetic into the intrathecal space, verification of the position of the tip of the needle in AP fluoroscopy must be performed. Measurement of saturation and the presence of resuscitation equipment are mandatory. Infections have been described, but the incidence is unknown and probably very low.