The patient lies in the prone position on an X-ray permeable table with a pillow under the abdomen to flatten the lumbar lordosis. Provocative discography is performed in the operating theatre under strict sterile conditions. Thirty minutes before the intervention, the patient receives antibiotics (2 g cephazolin, i.v.). Many pain specialists also mix antibiotics within the intradiscal-injected contrast at a concentration of between 1 and 10 mg/ml (e.g., 3 mg/ml cephazolin). The administration of antibiotics to prevent discitis is disputed. Yet currently, international consensus exists to administer, prior to the procedure, antibiotics as part of the complete discography procedure. The most important condition for the prevention of discitis is the regulation of strict sterile techniques.  The skin of the lower back and the gluteal region is thoroughly disinfected. The pain specialist and his assistant must wash their hands according to the hospital's local protocol, and must wear protective clothing (surgical caps, surgical jackets and sterile gloves). After the injection point has been marked, the patient is covered with a sterile drape. The same must be done with the C-arm. Due to the limited rotation of the C-arm, it must be located on the side of the patient where the needle is to be inserted.

The levels to be examined by discography are selected, based on a combination of medical history, physical examination and additional examinations. The symptomatic level and the two adjacent levels are always examined. One or two adjacent intervertebral discs can serve as control levels.

The C-arm is first positioned with the direction of the radiation beam parallel to the end plate of the lower vertebral plate of the disc. In the discs above L5-S1, the C-arm is then rotated ipsilaterally until the lateral aspect of the articular process overlies the axial middle of the disc to be punctured (Figure 1), and the disc height is at its maximum. In this projection, the needle can be inserted parallel to the direction of the radiation beam and brought into position (tunnel vision). 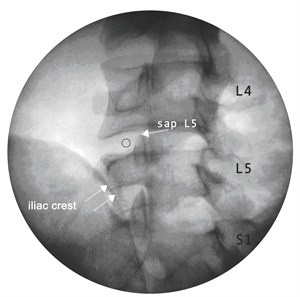 Figure 1. Starting point of the needle, assuming a maximum disc height, is such that the C-arm is rotated so that the facet column is between one-third and one-half of the vertebral body. As a result, the insertion point is directly lateral to the superior articular process (sap). 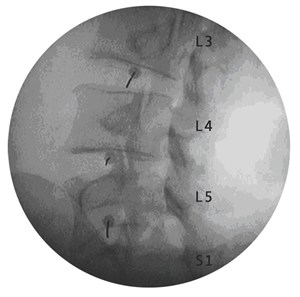 For the positioning of the needles, a new needle is used for each disc to be examined. After anaesthetising the skin and underlying tissue, a one- or two-needle technique can be used to approach the disc. In a two-needle technique, a 20-G needle is advanced over the lateral border of the superior articular process. A 25-G hollow needle is then inserted through this needle and into the annulus fibrosis until it reaches the centre of the nucleus. The two-needle technique may help to reduce the incidence of discitis and allow the disc to be entered with small-diameter needles (e.g., 27-G), which may help to prevent the incidence of iatrogenic disc degeneration. The needle is carefully advanced to the needlepoint end position. Beyond the superior articular process, the needle passes through the intervertebral foramen in the vicinity of the ventral branch. In case of paraesthesia, the needle must be repositioned. A strong resistance is felt as the needle passes through the annulus fibrosis. The needle is pushed through the annulus fibrosis to the centre of the disc. The needle's progress is monitored in various projections, first in AP view and then in lateral view (Figure 3). Ideally, after placement, the needle is located in the middle of the nucleus of the disc nucleus, as seen in the AP view as well as in the lateral view. 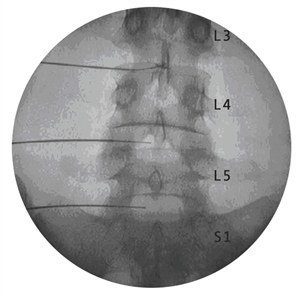 After verification of the correct needle position, the stylet is removed from the needle and the needle is connected to a contrast agent delivery system, which can measure the intradiscal pressure. The rate of infusion of the contrast agent should not exceed 0.05 ml/sec. This infusion rate reflects a static flow that corresponds with the distension pressure in the intervertebral disc. If a higher flow is used, false positive discographies can occur due to the resultant pressure peaks. These pressure peaks, due to vertebral end-plate compression and distention of the adjacent facet joint, often provoke pain. It is important that the disc expected to be the most painful is the last to be stimulated. The patient must not be able to see which disc is being stimulated.

If the painful disc is stimulated first, it is possible that the echo of that pain lasts long enough to make adequate stimulation at other levels no longer possible. When these conditions have been met, the stimulation can be started.