The patient lies in the prone position on the operating table with a pillow under the abdomen to flatten the lumbar lordosis.

In a PRF treatment, the C-arm is positioned in such a way that the X-rays run parallel to the end plates of the relevant level. Thereafter, the C-arm is rotated until the spinal process projects over the contralateral facet column. With the C-arm in this position, the injection point is found by projecting a metal ruler over the lateral part  of the intervertebral foramen.

A 10-cm long, 22-G needle is inserted in the direction of the radiation beam. Thereafter, the direction is corrected such that the needle is projected as a point on the screen (Figure 1). 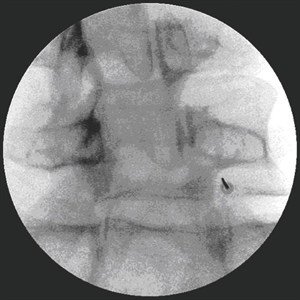 The direction of the radiation beam is now modified to a profile (lateral) view, and the needle inserted until the point is located in the cranial dorsal part of the intervertebral foramen (Figure 2). 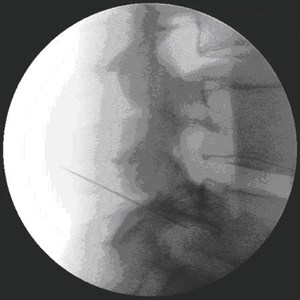 In AP view, the course of a small amount of contrast agent is monitored with 'real-time imaging'. The contrast spreads laterally caudally along the spinal nerve root (Figure 3). 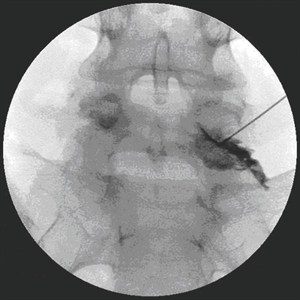 In PRF treatment, the insertion point is determined in the same way as for the test block. This time, the projection is kept as medially as possible in order to maximally reach the spinal ganglion. The cannula is inserted in the direction of the radiation beam. While the cannula is still located in the superficial layers, the direction is adjusted so that the cannula is projected as a spot on the screen. Thereafter, the cannula is carefully inserted further until the tip is located in the middle of intervertebral foramen in lateral view. The stylet is removed and exchanged for the RF probe. The impedance is checked, and thereafter, stimulation at 50 Hz is carried out. The patient should now feel tingling at a voltage of < 0.5 V. If these criteria are met, the position of the cannula is recorded in two directions on a video printer. Thereafter,a pulsed current (routinely 20 msec current and 480 msec without current) is applied for 120 sec with an output of 45 V; during this procedure, the temperature at the tip of the electrode may not surpass 42°C. The output may need to be reduced.

The aim is an impedance of less than 500 W. If it is higher, fluid injection can reduce this value. After repositioning, a lower stimulation threshold for additional treatment can be searched for.