The patient lies in the prone position on the operating table with a pillow under the abdomen to flatten the lumbar lordosis. If necessary, sedation should be light in order to enable communication with the patient. Firstly, the anatomical structures are identified with an anterior posterior view. Next, the C-arm is rotated axially to align the X-ray beam parallel with the L4-L5 disc in order to remove parallax of the end plates. The C-arm is then rotated approximately 15° obliquely to the ipsilateral side so that the junction between the superior articular process and the transverse process, the traditional target point, is more easily accessible. Then, the insertion place is marked on the skin. The target is the cephalad junction between the superior articular process and the transverse process.

In test blocks, the target point must be chosen lower between the upper margin of the transverse and mamillary processes (about halfway the transverse process). 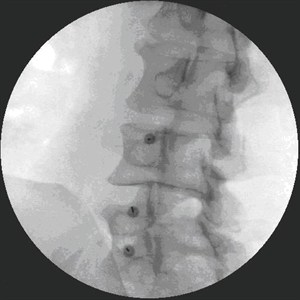 In the lateral fluoroscopic view, the electrode tip should now lie at the base of the superior articular process in the plane formed by the so-called facet column at the lower aspect of the intervertebral foramen, approximately 1 mm dorsal to its posterior border (Figure 2). 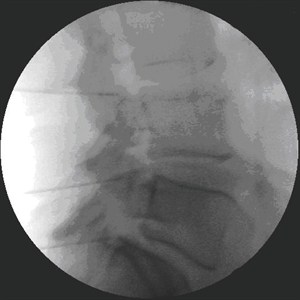 When the correct needle position is confirmed in multiple views, the impedance is checked and a sensory stimulus current of 50 Hz applied. The electrode position is generally deemed adequate if concordant stimulation is obtained at ≤ 0.5 V. Motor stimulations at 2 Hz serve to confirm correct needle placement via contraction of the multifidus muscles. In case of improper placement, distal muscle contractions occur in the legs. Although not always detectable, local muscle contractions in the back can generally be observed and palpated by the pain specialist. If leg movement is observed or the patient feels contractions in the leg, the needle must be repositioned. When the needle is properly positioned, 0.5 ml of local anaesthetic is injected.