Test block of the thoracic spinal ganglion above level Th7

The test block is performed with the patient in the prone position and without sedation in order to maintain optimal communication with the patient. Since one thoracic segment frequently overlaps another, it is advisable to perform two or more test blocks in order to identify the segment involved. An intercostal test block can be performed to confirm the involvement of a thoracic segmental nerve. The test block is performed at the level where the most significant pain relief will be gained. In the higher thoracic region, the classic posterior lateral approach cannot be used because the intervertebral foramen is located more anteriorly.  A proper injection site is difficult to reach, due to the angle with the ribs. This is why an alternative technique is applied in order  to reach the spinal ganglion at level Th7 and higher.

Approach of the spinal ganglion above level Th7

A dorsal approach is chosen with the patient in the prone position. The needle tip is positioned in the cranial dorsal part of the intervertebral foramen, which is the same as in the classical dorsal lateral approach. The site of insertion of the needle is the middle point (outer half) of the pedicle arc of the vertebrae in the anterior posterior (AP) view (Figure 1). This approach is supported by data from a cadaver study which showed that the spinal ganglion is located more laterally. The injection site is confirmed by means of a lateral fluoroscopic view. The lateral view should focus on the median dorsal quadrant of the intervertebral foramen where the spinal ganglion is located. After local anesthetic injection, a small hole is made in the vertebral lamina and a 16-G Kirschner wire is inserted. 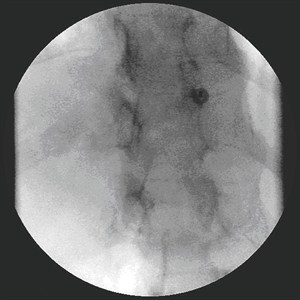 While drilling, lateral radiological monitoring should be used in order to ascertain that the Kirschner wire does not shoot past the target area. The cannula is then inserted through a 14-G needle which is placed through the drilled hole until it reaches the proper position in the intervertebral foramen. It is imperative that an assistant keeps the 14-G needle properly in position so that the drilled hole is not missed. The final position of the cannula is monitored by means of a lateral fluoroscopic view. The needle should be located in the cranial medial dorsal part of the intervertebral foramen (Figures 2 and 3). 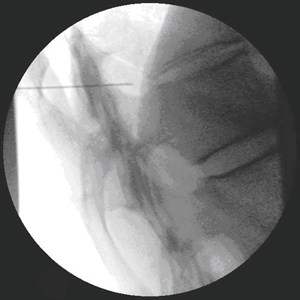 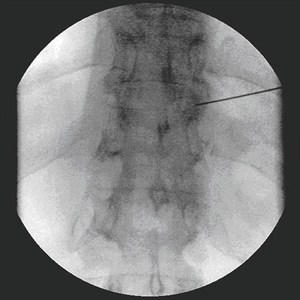 Figure 3. Test block of the DRG beneath level Th10. The needle is in the centre of the facet joint column: AP view.

Test block of the thoracic spinal ganglion below level Th7

For the low thoracic levels, the spinal ganglion (DRG) can be treated with a technique used at the lumbar level. The intervertebral foramen is noted on the X-ray image at an oblique position of 15°. Using AP fluoroscopic monitoring, the tip of the 10-cm-long needle is noted to be caudal to the pedicle arc of the vertebrae at the lateral half of the pedicle. In transverse view, the tip is located in the cranial dorsal part of the intervertebral foramen. The stylet is removed and the electrode placed. On stimulation at 50 Hz of current between 0.4 and 0.8 V, a tingling sensation is felt by the patient in the corresponding dermatome; motor stimulation is at 2 Hz with the threshold value being at least twice as high as the sensory threshold value. The anaesthetic lidocaine 2% is injected after the correct position of the needle has been confirmed by means of a water-soluble contrast agent and an intravascular injection has been ruled out.  Percutaneous RF treatment of the spinal ganglion in the upper thoracic segment (Th8/Th10) has always been difficult since an oblique approach is not possible, due to the risk of pneumothorax.